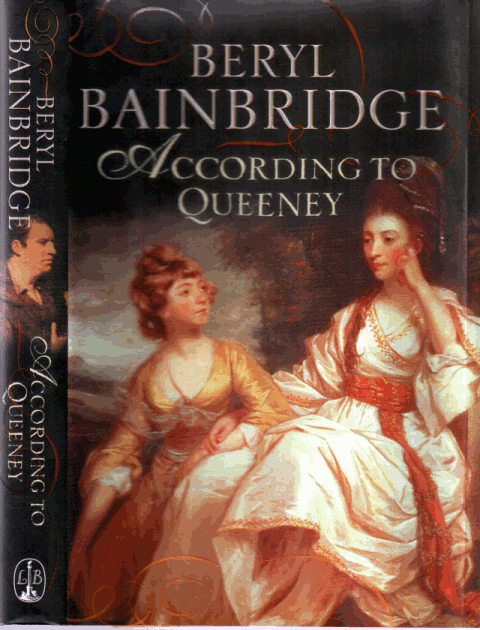 On 6 October 2001, BBC Television broadcast According to Beryl. Their hour-long account of the family arrangement enjoyed by Samuel Johnson and the Thrale family of Streatham, seen through the eyes of Beryl Bainbridge, author of the book on the same subject, According to Queeney.

Beryl Bainbridge always does a painting after each book, and this one is called “;The Latin Lesson”;. It shows a painting of Samuel Johnson, Beryl Bainbridge and her editor - who once taught Latin to her, as Johnson once taught Queeney Latin. Stuck on to the painting are reproductions of James Boswell, Tetty (Johnson’s wife), Mr & Mrs David Garrick and Hester Thrale, the one closest to his heart, and Queeney with the Pope.

Bainbridge visits Johnson's Gough Square house and talks about Johnson's mannerisms, Joshua Reynold's portrait of Johnson. She describes the Johnsons Court household and the event when Johnson was in deep despair - near to insanity - and was rescued by the Thrales who then took Johnson to live with them at Streatham Park. An oil painting of Streatham Park is show, as is Robert Edge Pine's portrait of Hester Thrale. Joshua Reynold’s portrait of Henry Thrale is shown. A further portrait of Thrale is also shown. Bainbridge describes how Johnson was introduced to the Thrales through their friend Arthur Murphy.

Bainbridge goes to Streatham - now a London Suburb - and goes up a hoist crane, comparing an old map of Streatham Park, whilst describing how it was at that time. Bainbridge talks of Johnson's happy family life with the Thrale family at Streatham Park. Actors read from parting letters between Johnson and Hester Thrale. 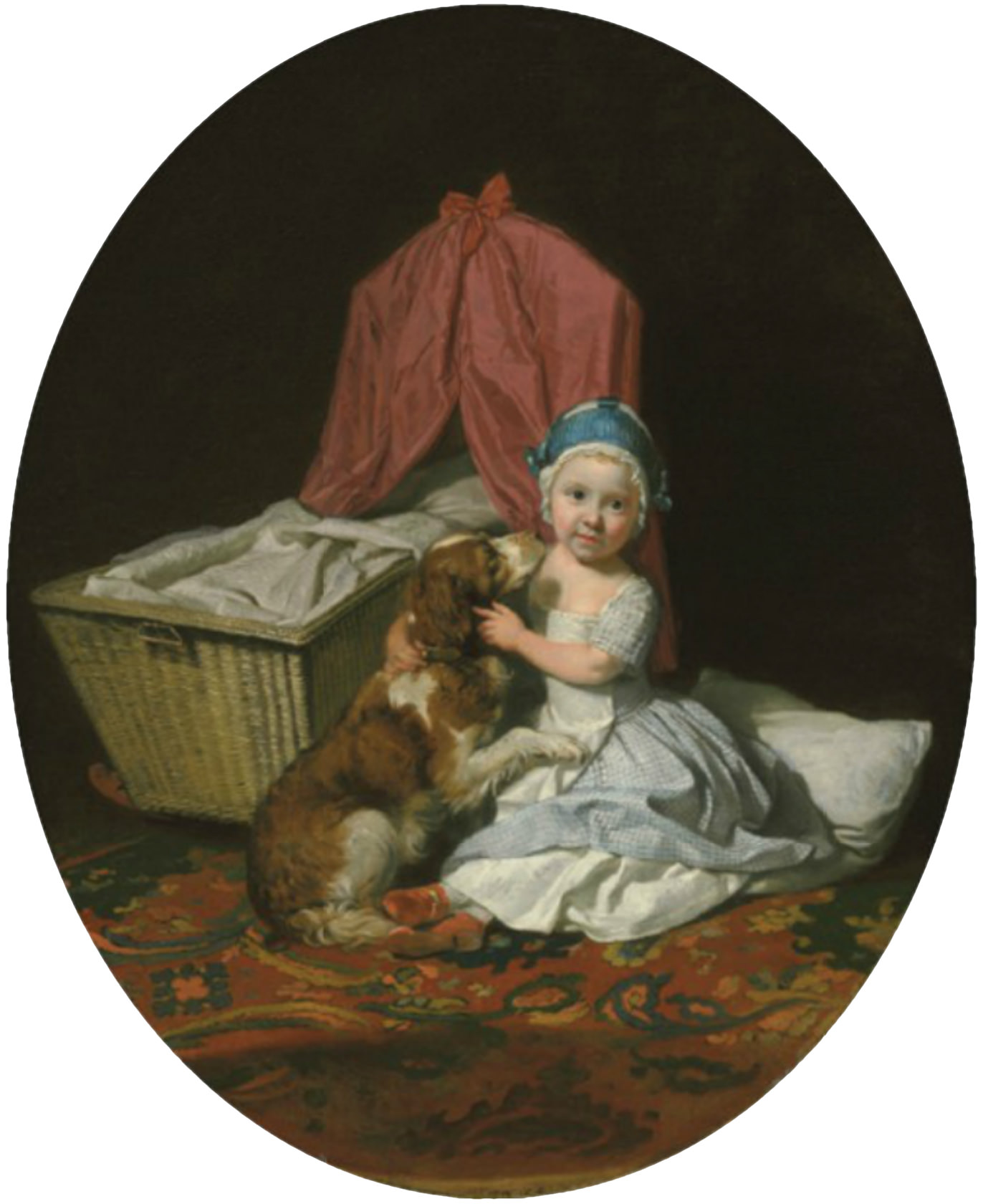 Bainbridge talks to the Streatham locals, some of which know of Thrale and Johnson. She sees the Mulberry tree left from Streatham Place under which Johnson liked to sit and Hester Thrale's pet Spaniel dog - Belle - was buried. A miniature drawing of Hester Thrale is shown. Bainbridge talks about Thrale's 12 children. The portrait of Hester and Queeney is shown, as is an engraving of Hester Thrale and Samuel Johnson. On the Streatham Council estate many of the buildings are named after Johnson's contemporaries, Burney House, Boswell House, Levett House, Garrick House, Boothby House, and Chesterfield House.

Bainbridge talks about why her work According to Queeney looks at Johnson through Queeney's eyes. 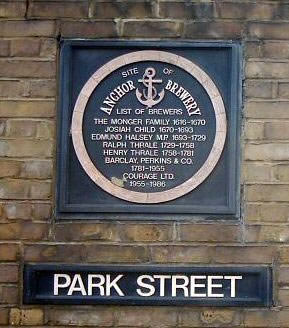 They walk to Southwark Cathedral near to where many of Thrale's children were buried. She talks about Lucy Thrale, and how she was called Lucy Elizabeth Thrale - Elizabeth being the name of Johnson's late wife. Bainbridge also talks about Henry Thrale's two near bankruptcies.

Bainbridge talks about Johnson’s padlock which was sold in 1807 with Hester's possessions after her death. Bainbridge puts forward her idea that this wasn’t a sexual domination thing but to chain Johnson - at his request - during periods of, uncontrollable, near insanity.

Bainbridge visits Poets Corner at Westminster Abbey and sees Johnson's grave and his marble bust. She visits the National Portrait Gallery and sees portraits of Johnson.

Bainbridge goes to St Leonard’s Church Streatham. She meets Rev. Jeffrey Wilcox and sees the gravestone of Susannah Thrale inside the church. They see Henry Thrale's mourning tablet and talk about his gluttony. They visits the churches’ underground burial crypt and see Henry Thrale’s very large leather decorated, lead-lined coffin and the plaque which is inscribed: 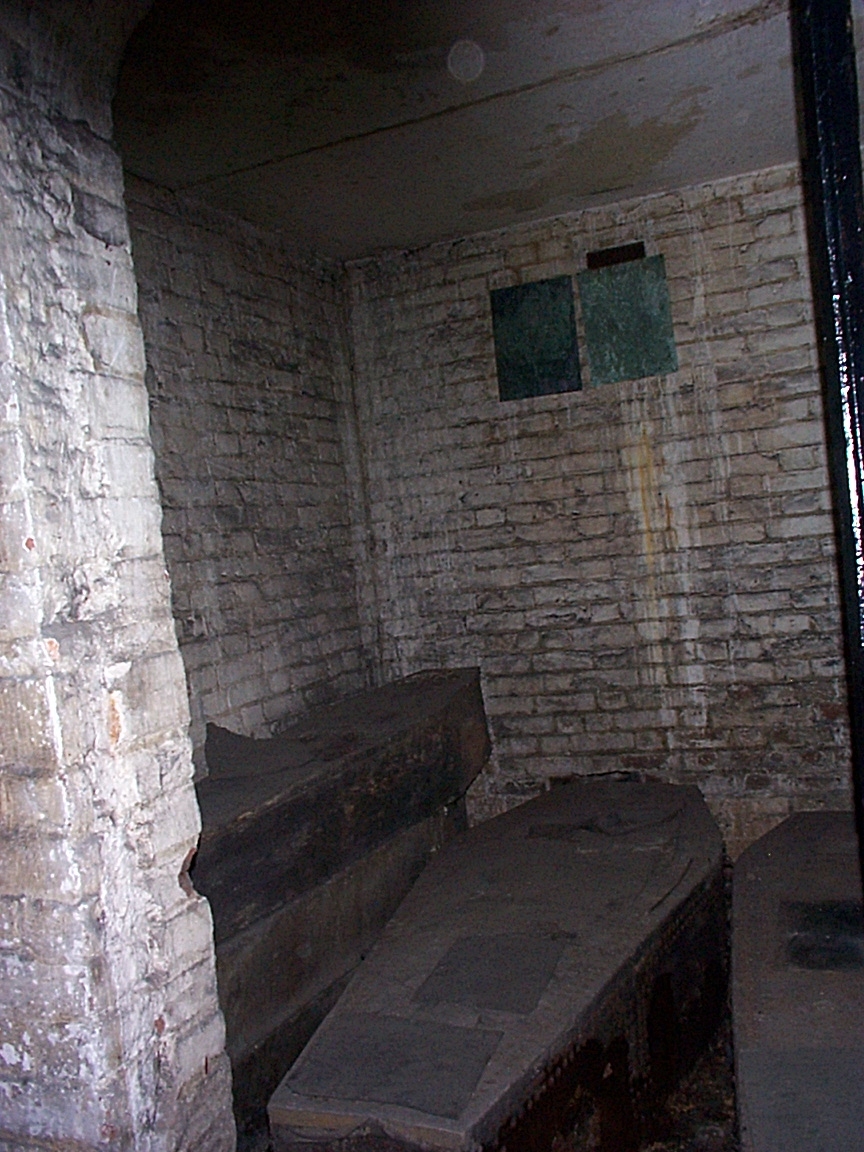 The events following Henry Thrale’s death and Hester's later passion for and remarriage to Gabriel Piozzi were discussed. A further portrait of Hester Thrale was shown. The infamous parting letters exchanged between Johnson and Hester Thrale made shortly before Johnson’s death are read by actors.

Bainbridge sees Johnson’s death mask in the National Portrait Gallery. Bainbridge visits Brynbella in Wales to talk about Hester’s happy life with Piozzi here for about 20 years. She talks of Hester’s total devotion to Piozzi and wishes she could have been brought up in a house like this.

The programme is interspersed throughout with Bainbridge’s readings from According to Queeney.

I thoroughly enjoyed watching this documentary. I am happy to provide other enthusiasts with a copy of the programme solely for their enjoyment - for non-commercial and non-broadcast purposes only. All I ask is the cost of postage and a blank DVD disk. If you would like a copy, please ask me.

A one-off film in which author Beryl Bainbridge chronicles the extraordinary relationship during the 18th century between Samuel Johnson and Hester Thrale, the wife of rich London brewer Henry Thrale, which forms the basis for her latest novel, According to Queeney.

Johnson lived with the Thrales for most of the last 20 years of his life, during which time Hester nursed him through his bouts of melancholia and gout - until she ran off with her daughter Queeney’s Italian singing teacher.

Jim Carter and Suzannah Harker read extracts from letters Johnson and Mrs Thrale wrote to each other. Beth Goddard and Bainbridge herself read from According to Queeney. 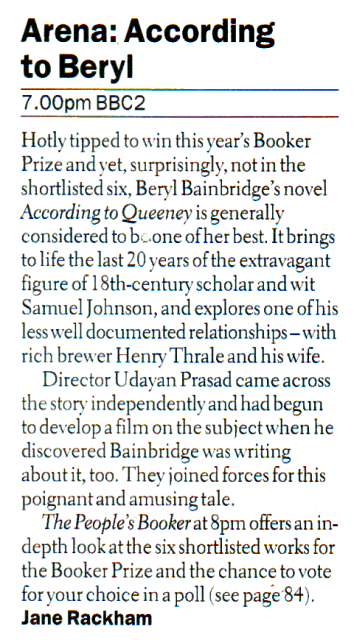 Hotly tipped to win this year’s Booker Prize and yet, surprisingly, not in the shortlisted six, Beryl Bainbridge’s novel According to Queeney is generally considered to be one of her best. It brings to life the last 20 years of the extravagant figure of 18th-century scholar and wit Samuel Johnson, and explores one of his less well documented relationships – with rich brewer Henry Thrale and his wife.

Director Udayan Prasad came across the story independently and had begun to develop a film on the subject when he discovered Bainbridge was writing about it, too. They joined forces for this poignant and amusing tale.

Tags:
Pets
‹ According to Queeney up Thrale Almshouses ›