This is the travelog of Michelle and David and all three children on Ethan’s first foreign holiday. We decided not to venture to far too far. A beautiful gîte in the tiny village of Le Favril in Normandy, Northern France was the destination. The village has just 400 inhabitants.

We drove to Portsmouth the night before and stayed at a Travelodge to catch the 8am ferry.

The children enjoyed the ferry as we had booked a 4 berth cabin. Extremely useful for leaving things like nappy changing equipment in, allowing you to move around the ship empty-handed. The crossing from Portsmouth to Caên is 6 hours and very young children often get tired and miserable.

The French country side is beautiful and driving is fairly easy. We found the village within a hour and a half. Despite the village being tiny, we first had to find the owners farm house which we eventually did. It was not too difficult asking someone as we both speak very basic French. I always find village life interesting as literally everyone does know everyone.

The gîte is set in about half an acre of land and had swings and a very crude sandpit. Most of Normandy appears to be built in a mock Tudor style. Inside the gîte was very homely. There was an enormous open fire and living area with a dining table for ten people. Next to this was a very well equipped kitchen with microwave and dishwasher. Adjacent was the downstairs toilet toilet shower room and utility room. 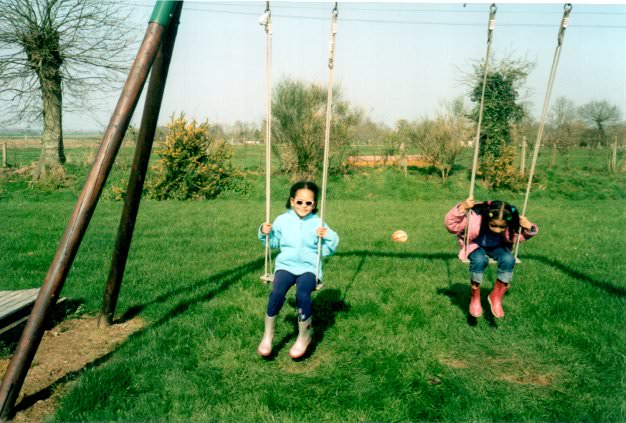 Upstairs were three bedrooms. One twin room, one double with a cradle draped in green linen. Natasha and Elise shared this room. The master room had a double bed and two further single beds with a white distressed looking built-in wardrobe. There was still plenty of room left after we had taken residence.

The upstairs bathroom had a bath and shower, two sinks and a toilet. Overall the accommodation was superb.

The gîte was right next to an old building which was the village school & town hall. At the weekend - and probably in the week too - it was somebodies home. The village also contained two other things of note. Firstly was the village church which is memorable for the church yard which was quite different to what I am used to. The newest monuments were very substantial, whilst the oldest were in some cases surrounded with glass house type structures presumably to protect against the weather. To my eye, this looked tacky and out of place.

The other think of note in the village, was the restaurant. It seemed strange that this tiny village which had no store or shop should have a restaurant. How could it have enough trade? It rarely seemed to have customers. Perhaps it doubled as a bar, a place where villagers met? Yet it was always empty. I think the clue is that the owners live there.

We did eat there one day. Our rudimentary knowledge of French is good enough for restaurants. However, here there was very little that we recognised on the menu and much of that seemed to be salami type meats which I dislike. I picked steak, something I rarely eat. Even with this we ended up being given a salami starter!

I like my steak medium well cooked. Michelle prefers it cooked to West Indian taste - well cooked with no pink bits. I had previously heard about French taste for rare meat, but nothing quite prepared me for quite how rare it was. It wad too rare for me. I now faced the task of trying to explain to the waiter, who didn't speak a word of English that I wanted the steak taken back for more cooking. We succeeded eventually.

In the garden of the gîte, each day the children & I played a sort of tennis game that we invented using a light foam ball and some beach netted rackets. The game involved taking it in turn to throw the ball at each other, if the receiver caught the ball in the net they got a point. If not but the ball hit the racquet, you got half a point. The girls haven't really got the hang of ball games yet. So although I was only a few feet away, they both had difficulty throwing the ball anywhere near me! This would have given them a clear advantage, were it not for that they found it difficult to catch as well! I had to work quite hard to ensure that they won! The girls decided to take turns at commentating. We had great fun playing this game. This was something that we did almost every day.

Other notable things which we did included having lunch on a small ship (or was it a large boat?) in Honfleur harbour. The food, which was seafood was good. The view and setting were great. The sun wasn't too bad either. We had a good time.

We enjoyed a trip to the local castle. This was very picturesque, surrounded by a moat and had a vaguely homely feel. This was probably helped by virtue of the more modest proportions of the castle. The grounds were blessed with some apparently tame and beautiful peacocks and flamingos.

On the day of our departure the local town had a fair to celebrate Easter. So having packed our bags and filled the car, we stopped in town en route. Our ferry was leaving in the afternoon, so we arrived early - before most locals. This was unfortunate because the kids wanted to go on the rides and most were still setting up.

A rather strange thing happened during the ferry trip on our return. Whilst resting in our cabin, David dreamt about the death of the still-living Queen Mother, who died a few days later. Weird!