The attack of General Haynau Visitors to Barclay's brewery during the 19th century included many of the leading figures of the day ranging from King Edward VII, Prince of Wales, to Bismarck and Napoleon III. But one other visitor sparked an international incident. The Austrian General Haynau was notorious for the brutality with which he put down rebellions in Hungary and Italy. So the ink had scarcely dried on his name in the visitors' book in 1850 when the word spread that the 'Hyena' was in the brewery. The General and his companions had barely crossed the yard, reported The Times, when he was attacked by draymen and brewery workers with brooms and stones, shouting 'Down with the Austrian butcher'.

Haynau fled along Bankside pursued by the angry men and took refuge in the George pub (77 The Borough), from which he was rescued by the police with difficulty, and spirited away by boat across the river. The Austrian ambassador demanded an apology, but the Foreign Secretary Lord Palmerston sided with the brewery men, saying…

they were just expressing their feelings at what they considered inhuman conduct by a man who was looked upon as a great moral criminal. 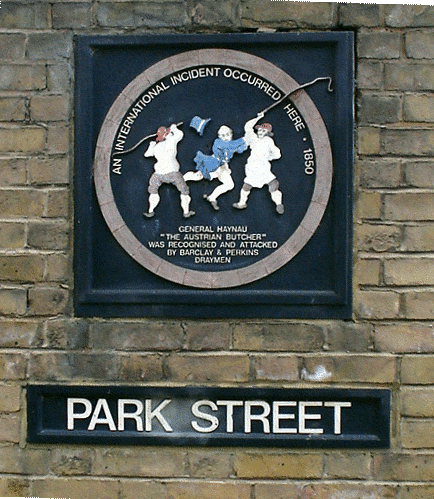 Only after the intervention of a furious Queen Victoria and the threatened resignation of Palmerston was a more conciliatory letter sent to Vienna. Even then Austria was still so resentful that it sent no representative to the funeral of the Duke of Wellington in 1852.

Public feeling in England was completely on the side of the draymen, who became the heroes of many a street ballad. When the Italian revolutionary Garibaldi visited England in 1864, he insisted on visiting the brewery to thank "the men who flogged Haynau".