John Courage was a shipping agent at Aberdeen. He moved to London and founded a business in 1787 when he purchased a brewery in Southwark. The company - known as Courage & Donaldson between 1797 and 1851 - was a London brewery. In the inter-war years it extended its operations to the England's Home Counties, however, its customer base rested on the thirst of London's dockers. In the 1950s the docks began to decline. Courage responded with mergers and acquisitions most of them in southern England. 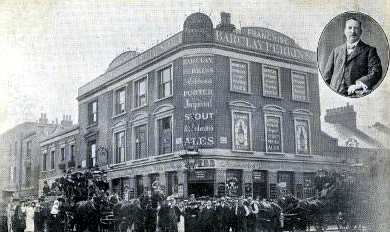 Brewing ceased in 1962, after which the site was used to build a huge bottling factory, appropriately called the Globe Bottling Store.

The company was renamed Courage Limited in October 1970.

The Anchor Brewery finally closed in 1981 and the buildings were demolished. The land was sold for redevelopment as housing. All brewing being transferred to a new brewery at Worton Grange, Reading, Berkshire.

The remains of the ancient Globe Theatre were discovered during redevelopment on the old brewery site in 1989, and after seven years of campaigning led by Sam Wanamaker, a reconstructed Globe Theatre was opened to the public in August 1996 with a performance of The Two Gentlemen of Verona, the first production held on the site for more than 350 years.

Tags:
Anchor brewery
‹ The attack of General Haynau up

In 1955, the year of the merger, my father bought the tenancy of The Windmill pub at 52 Park Street. Our family moved there when I was 2 years old. We remained there until 1966. During that time we observed many of the developments detailed in the account above. The photograph of the BP pub in Park Street has some similarities to the The Windmill. Is it known when this photograph was taken?