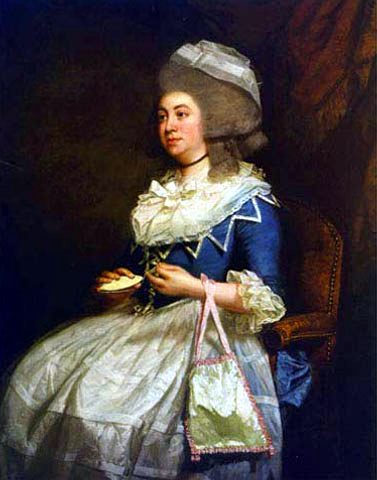 In 1789 a poor quality satire The Sentimental Mother, A Comedy in Five Acts; The Legacy of an old Friend and His Last Moral Lesson to Mrs. Hester Lynch Thrale, now Mrs. Hester Lynch Piozzi. was published by Baretti in the European Magazine.

She is a most dear Creature, but never restrains her Tongue in any thing.

— Fanny Burney's remark to her sister.

When Streatham spread its pleasant board,
I opened learnng's valued hoard,
And as I feasted, prosed.
Good things I said, good things I eat,
I gave you knowledge for your meat,
And thought th' account was closed.

If obligations I still owed,
You sold each item to the crowd,
I suffered by the tale.
For God's sake, Madam, let me rest,
No longer vex your quondam guest:
I'll pay you for your ale.