Enthralling tales of the Thrales 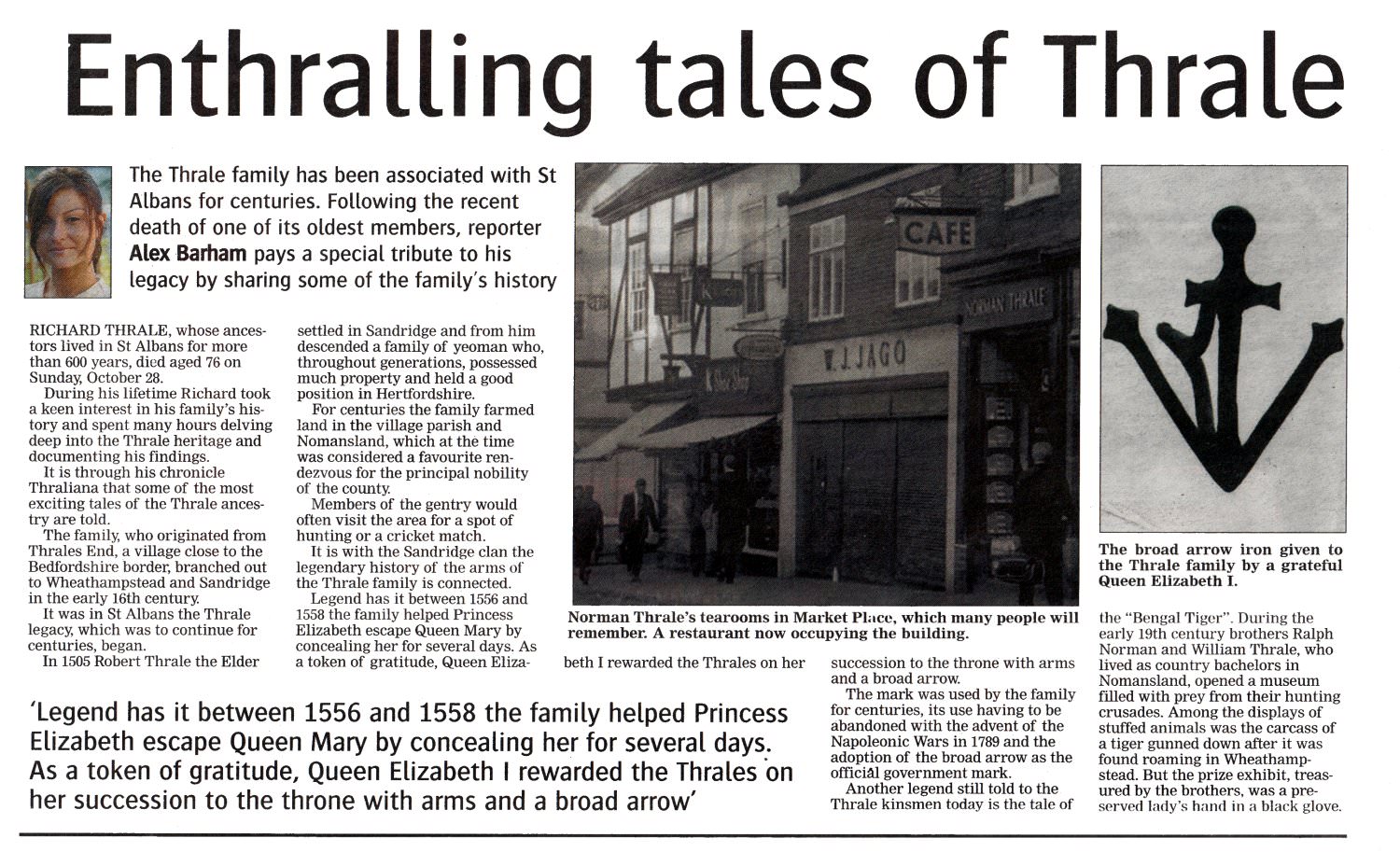 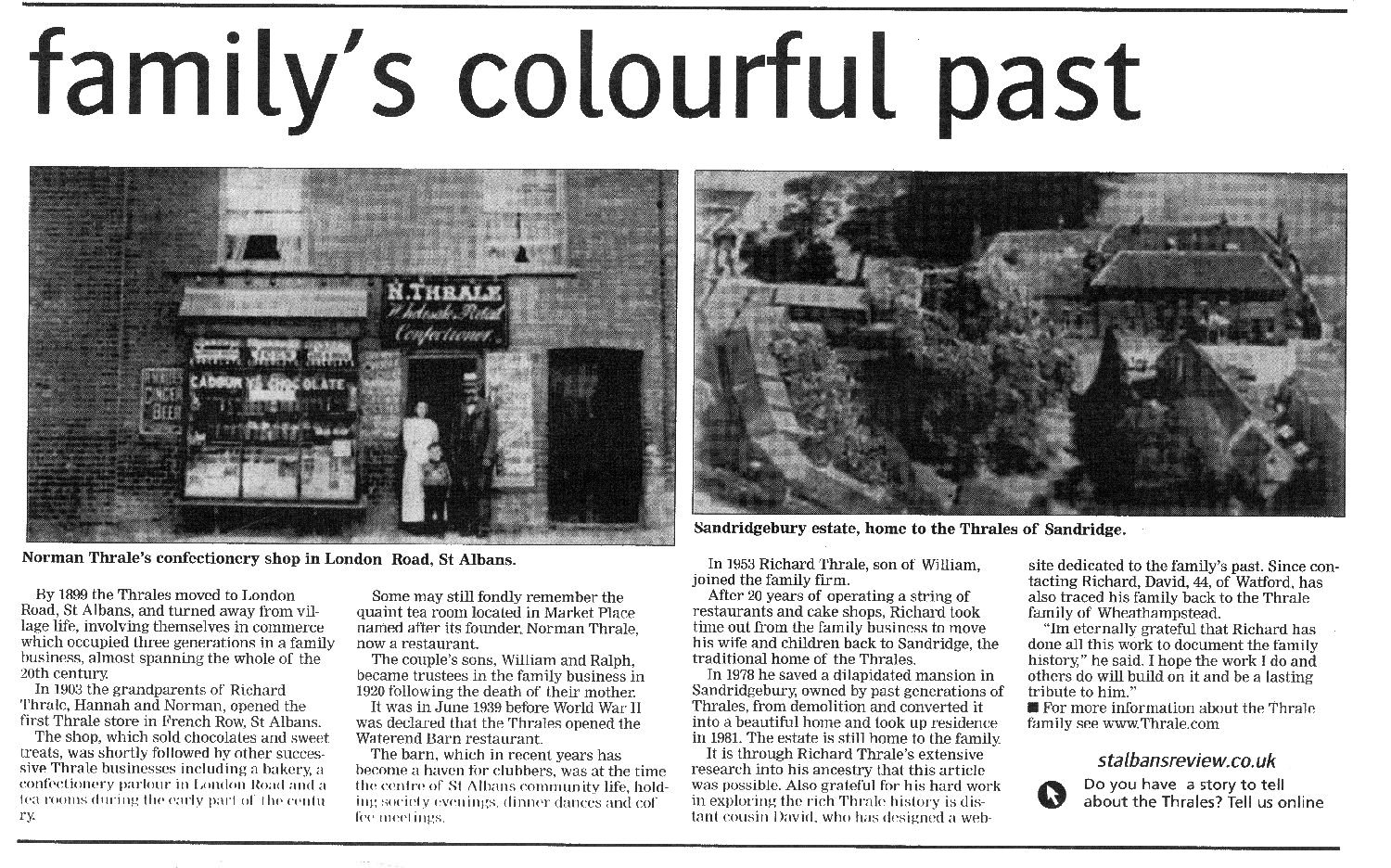 The Thrale family has been associated with St Albans for centuries. Following the recent death of one of its oldest members, reporter Alex Barham pays a special tribute to his legacy by sharing some of the family's history.

During his lifetime Richard took a keen interest in his family's history and spent many hours delving deep into the Thrale heritage and documenting his findings.

It is through his chronicle Thraliana that some of the most exciting tales of the Thrale ancestry are told.

The family, who originated from Thrales End, a village close to the Bedfordshire border, branched out to Wheathampstead and Sandridge in the early 16th century.

It was in St Albans the Thrale legacy, which was to continue for centuries, began.

In 1505 Robert Thrale the Elder settled in Sandridge and from him descended a family of yeoman who, throughout generations, possessed much property and held a good position in Hertfordshire.

For centuries the family farmed land in the village parish and Nomansland, which at the time was considered a favourite rendezvous for the principal nobility of the county.

Members of the gentry would often visit the area for a spot of hunting or a cricket match.

It is with the Sandridge clan the legendary history of the arms of the Thrale family is connected.

Legend has it between 1556 and 1558 the family helped Princess Elizabeth escape Queen Mary by concealing her for several days. As a token of gratitude, Queen Elizabeth I rewarded the Thrales on her succession to the throne with arms and a broad arrow.

The mark was used by the family for centuries, its use having to be abandoned with the advent of the Napoleonic Wars in 1789 and the adoption of the broad arrow as the official government mark.

Another legend still told to the Thrale kinsmen today is the tale of the "Bengal Tiger". During the early 19th century brothers Ralph Norman and William Thrale, who lived as country bachelors in Nomansland, opened a museum filled with prey from their hunting crusades. Among the displays of stuffed animals was the carcass of a tiger gunned down after it was found roaming in Wheathampstead. But the prize exhibit, treasured by the brothers, was a preserved lady's hand in a black glove.

By 1899 the Thrales moved to London Road, St Albans, and turned away from village life, involving themselves in commerce which occupied three generations in a family business, almost spanning the whole of the 20th century.

In 1903 the grandparents of Richard Thrale, Hannah and Norman, opened the first Thrale store in French Row, St Albans.

The shop, which sold chocolates and sweet treats, was shortly followed by other successive Thrale businesses including a bakery, a confectionery parlour in London Road and a tea rooms during the early part of the century.

Some may still fondly remember the quaint tea room located in Market Place named after its founder, Norman Thrale, now a restaurant.

The couple's sons, William and Ralph, became trustees in the family business in 1920 following the death of their mother.

It was in June 1939 before World War II was declared that the Thrales opened the Waterend Barn restaurant.

The barn, which in recent years has become a haven for clubbers, was at the time the centre of St Albans community life, holding society evenings, dinner dances and coffee meetings.

In 1953 Richard Thrale, son of William, joined the family firm.

After 20 years of operating a string of restaurants and cake shops, Richard took time out from the family business to move his wife and children back to Sandridge, the traditional home of the Thrales.

In 1978 he saved a dilapidated mansion in Sandridgebury, owned by past generations of Thrales, from demolition and converted it into a beautiful home and took up residence in 1981. The estate is still home to the family.

It is through Richard Thrale's extensive research into his ancestry that this article was possible. Also grateful for his hard work in exploring the rich Thrale history is distant cousin David, who has designed a website dedicated to the family's past. Since contacting Richard, David, 44, of Watford, has also traced his family back to the Thrale family of Wheathampstead.

"I'm eternally grateful that Richard has done all this work to document the family history," he said. "I hope the work I do and others do will build on it and be a lasting tribute to him."

For more information about the Thrale family see www.thrale.com