The commentary is by her daughter Hester Lynch Thrale.

The epitaph engraved on my mother’s monument shows how deserving she was of general applause. I asked Johnson why he named her person before her mind. He said it was "because everybody could judge of the one, and but few of the other." 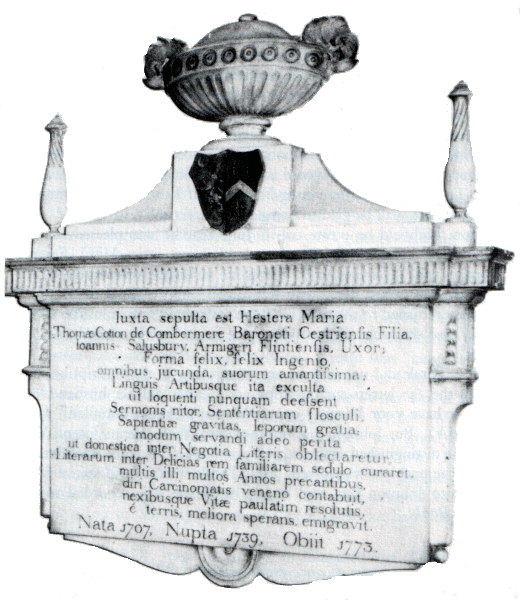 Mr. Murphy, who admired her talents and delighted in her company, did me the favour to paraphrase this elegant inscription in verses which I fancy have never yet been published. His fame has long been out of my power to increase as a poet: as a man of sensibility perhaps these lines may set him higher than he now stands. I remember with gratitude the friendly tears which prevented him from speaking as he put them into my hand.1

Murphy has been very kind to me, he has translated the Epitaph Johnson wrote upon my Mothers Monument; his kindness is more acceptable to me than his Verses—but the Verses are well enough too.2

Near this place
Are deposited the remains of
Hester Maria.
The daughter of Sir Thomas Cotton of Combermere, in the County of Cheshire, Bart., the wife of John Salusbury Esqr of the county of Flint.
She was born in the year 1707. Married 1739. died in 1773.

A pleasing form, where every grace combined,
With genius blest, a pure enlightened mind;
Benevolence on all that smiles bestowed,
A heart that for her friends with love o'erflowed:
In language skilled, by science formed to please,
Her mirth was wit, her gravity was ease.

Graceful in all, the happy mien she knew,
Which even to virtue gives the limits due;
Whate'er employed her, that she seemed to choose,
Her house, her friends, her business, or the muse.
Admired and loved, the theme of general praise,
All to such virtue wished a length of days.

But sad reverse! with slow-consuming pains,
Th' envenomed cancer revelled in her veins;
Preyed on her spirits—stole each power away;
Gradual she sank, yet smiling in decay;
She smiled in hope, by sore affliction tried,
And in that hope the pious Christian died.

In Thraliana, September to November 1776, Hester writes the following account of her mother…

“;She was for all personal and mental Excellence the most accomplished female that ever my Eyes beheld. Her shape so accurate, her Carriage so graceful, her Eyes so brilliant, her Knowledge so extensive, & her manners so pleasing that it was no wonder She had such Choice of Lovers in her Youth, & admireres in her advanced Age: She died aged 66. leaving behind her no equal for Powers of delighting her Friends and Companions”;