A new Thraliana - a chronicle of the Thrale family of Hertfordshire 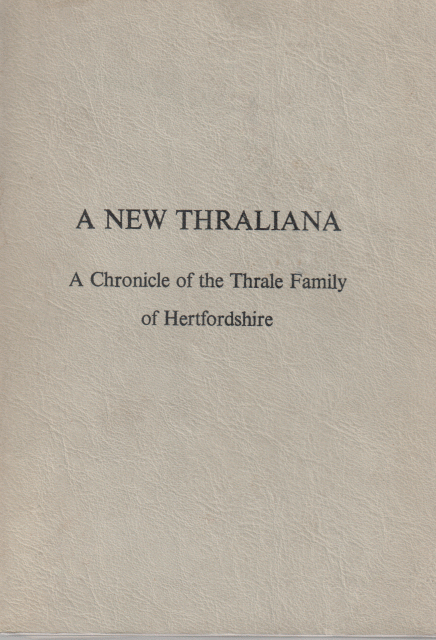 The following review of what is an excellent family history was printed in the Herts Advertiser shortly after the book was published in 1973.

A New Thraliana is the title of a book that Richard Thrale, local historian and genealogist, of Sandridgebury, Sandridge, has written and prudently dedicated to his three children - Christopher, Lynn and Gregory.

It is a chronicle of the Thrale family of Hertfordshire, published by Falconer Press, St Albans, price £1.50, for the wider enjoyment of all those who, like myself, could spend happy hours browsing over old family albums and enjoy the musty scent distilled by the fulsome details of old wills and bills.

The author has called his book New Thraliana because it follows a very remarkable 18th century book, written by an ancestor, Hester Lynch Thrale of Streatham, friend and patron of Samuel Johnson, and a very erudite person herself.

"Hester could not record what she did not know, and this New Thraliana attempts to rectify this omission in history by telling the tale of a yeoman Hertfordshire family and the people among whom they dwelt for centuries," said Mr Thrale.

Mr Thrale's quest for family knowledge has gone on for 20 years and has meant much hard work, delving into all sorts of musty records, including those which can only be read in ultra violet light, 6ft Latin documents, manorial rolls and wills.

Like a thread through the story runs the interests of the Thrale family - victuallers to the monastery and Abbey of St Albans in 1552 and landlords of local inns in succeeding centuries, including "the Read Lyon over agaynst the Crosse, and the Peacocke."

The present St Albans Thrale business of restaurants and cake shops started in about 1898 when Norman Thrale's wife, Hannah, placed sweets in her parlour window for sale: these were soon sold and a business was born.

Says Mr Thrale: "The best epitaph for Hannah is to record that even three quarters of a century after founding the business older local St Albans people still speak in happy terms of her."

The book is packed with facts about the Thrales, their joys and sorrows, successes and failures, strange hobbies and squabbles with formidable landlords - including Sarah Duchess of Marlborough. B.C.

There are three books referred to as Thraliana: