David moved so fast, as did kids. We had left and locked the house in 20 minutes flat. David drove rather faster than he should, trying to get to Portsmouth in time to board the ferry. Bad map reading and signs took us on the A27 east instead of West, and we lost some time. In Portsmouth, we got lost, and lost some more time. Michelle had a good feeling that despite our extreme tardiness, we would be able to board the ferry. We finally drove up to the ferry in a frantic state at arrived at 8.50, five minutes after it was due to leave. We were the last-but-one to board! To this day we do not know how we managed to get on that ferry. Divine intervention? 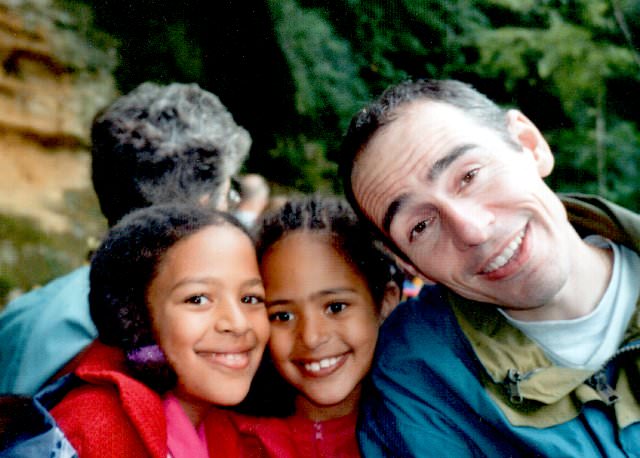 The ferry was good. The children enjoyed going on deck and breathing the fresh sea air. We made good use of our cabin for sleeping and later a shower. The cabins are a real boon, if you can book them, especially for the children to rest and storing hand luggage full of kids bits whilst exploring the ferry. The children were all very well behaved on the all the way to Portsmouth and on the ferry.

When the ferry arrived at Caen, we disembarked through customs and followed the signs to Rennes, but got lost somewhere en route. We stopped off at a small pretty town called Tilly to withdraw some Euros from a cash machine and buy a few provisions for the evening and breakfast before the shops shut (we had no idea if we would get anything late near our accommodation). By this time the children were very tired and hungry.

After a couple of hours we arrived at the Gîte in Le Mesnil Auzouf, which was owned by an English family. Our first impressions were that it was externally pretty, but the inside was less impressive, it:

The children explored the Gîte and were pleased to find swings in the garden and horses in the field next door. They are not difficult to please at this age.

Michelle woke up with a terrible sore throat, but we all slept well. The children were excited about horses and the garden. The inclined garden has a couple of swings and is about 80 feet long with a few trees.

We walked down to Le epicure - they offered us a tipple of whisky or rum - which sold very basic provisions and there was nothing else open on a Sunday. We decided to try and find a restaurant for lunch. We drove locally and found the town centre. There was pleasant, bar serving snacks. The boulangerie and patisserie was open.

We decided to go to the local hotel for lunch. David and I had a seafood starter of chopped crustaceans and corn, followed by fish in a white cheesy, creamy Normandy sauce with vegetables. The children chose melon and crudities which they didn't touch. They wanted chicken, rice and vegetables and ice cream for dessert - none of which was on the menu. The hotel staff kindly offered them chicken and chips which they ate.

As it was Monday we drove to the Supermarche and bought our much needed food and provisions for our stay. We also bought the girls a cardigan each as we had not brought enough warm clothing for them and it was rainy and chilly.

We went to the swimming pool in Bives which had slides, and a children and toddlers pool. The main pool was 3.4m deep, which mad a nice change from all the shallow British pools. The children all enjoyed taking turns to swim - or rather cling on to David - while he swam to the very deep end. We all had a lovely time, and returned to the Gîte tired and hungry.

Today we had planned to go to Festyland in Caên (fun!) but the weather was awful, it was chilly and raining heavily. Instead we went to Bayeaux, which was a pretty and pleasant town with lots of American and British tourists. After a long queue, we saw a copy of the famous tapestry with an interesting commentary. Natasha enjoyed this. However Elise was tired and Ethan was restless, it wasn't great for young children. Ethan's potty training is coming on a treat, he even used the urinals in Bayeaux.

On our way back, we drove through the neighbouring village of Beny Bocage. This was very pretty, and we used their supermarket a couple of times, some people even thought Michelle was French! Today, we found a purse containing £50, but without any information that we could use to return this to its owner.

It was raining all night and all morning. We were disappointed as the ongoing poor weather was really limiting what we could do. We had planned to go to Festyland again for the kids, but because of the rain we instead went to the caves. In the cave is a natural reservoir, with a lit trail along the damp, cold and dark passages. There was a brief film that explained about bats and other animal life in the caves. We saw a modest waterfall which lead to crystal formation.

At last some pleasant weather! Today we went to Festyland for the kids - a glorified fairground. The did enjoy themselves, despite the adults being underwhelmed. 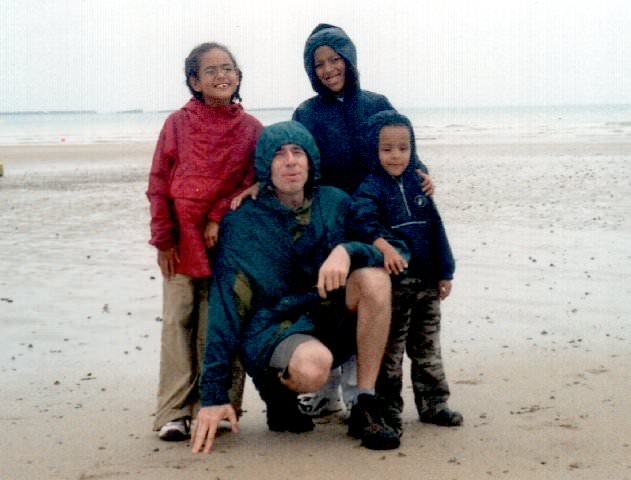 Today we went to the expansive and sandy Normandy dunes and beaches, location of the historic Normandy landings. Our visit accidentally coincided with the 60th anniversary of the landings, with Union flags, and flags of the other allies adorning villages and towns. The beaches still have some relics of the landings which we enjoyed exploring. We also had the privilege of meeting a French veteran, who we briefly chatted to in broken French.

Today was the last day of this rather pleasant holiday. We left the accommodation early and stopped off in town. It was market day and we waited a little whilst the first stall holders set-up. We purchased some local cide and biscuits before making our way to Caen to catch the ferry home.