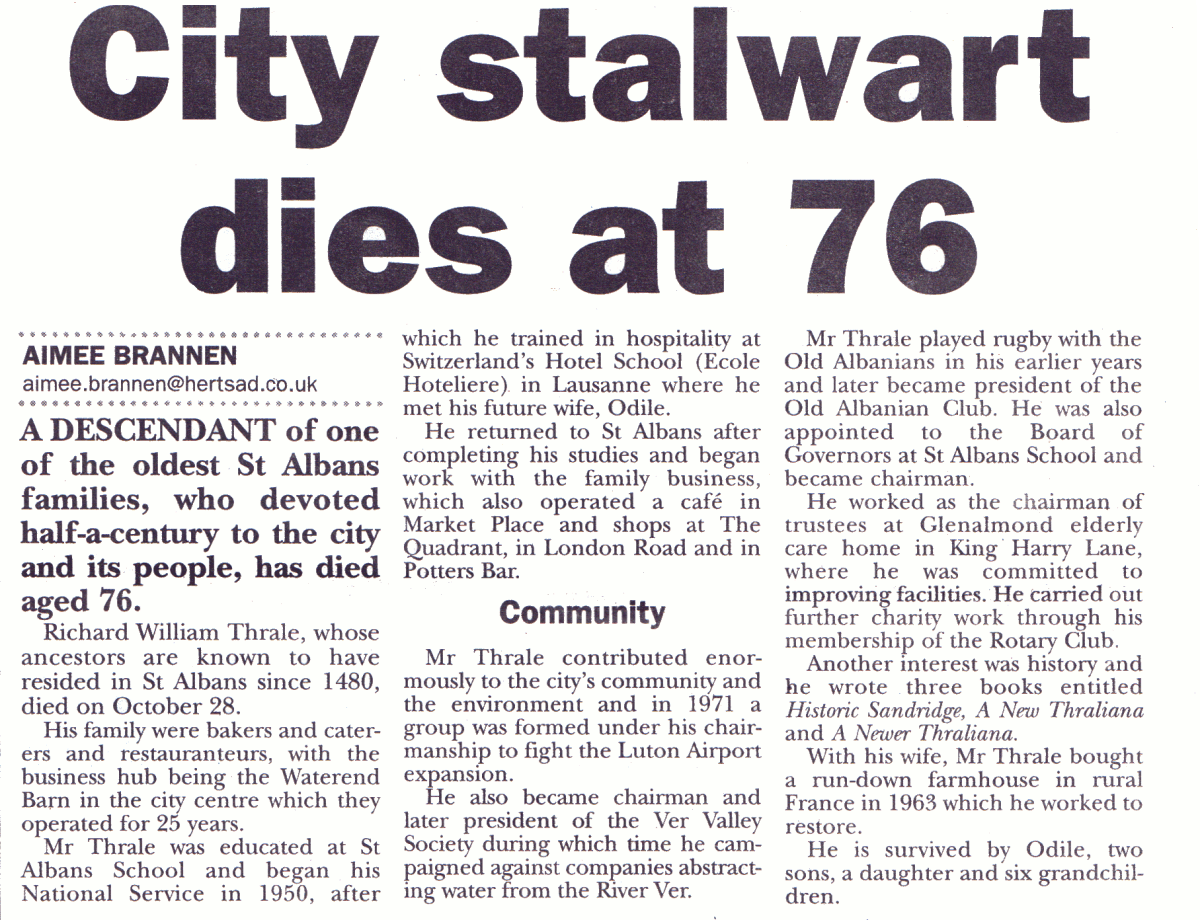 aimee.brannen@hertsad.co.uk A DESCENDANT of one of the oldest St Albans families, who devoted half-a-century to the city and its people has died aged 76.

Richard William Thrale, whose ancestors are known to have resided in St Albans since 1480, died on October 28.

His family were bakers and cater­ers and restaurateurs, with the business hub being the Waterend Barn in the city centre which they operated for 25 years.

Mr Thrale was educated at St Albans School and began his National Service in 1950, after which he trained in hospitality at Switzerland's Hotel School (Ecole Hoteliere) in Lausanne where he met his future wife, Odile.

He returned to St Albans after completing his studies and began work with the family business, which also operated a Café in Market Place and shops at The Quadrant in London Road and in Potters Bar.

Mr Thrale contributed enor­mously to the city's community and the environment and in 1971 a group was formed under his chair­manship to fight the Luton Airport expansion.

He also became chairman and later president of the Ver Valley Society during which time he cam­paigned against companies abstract­ing water from the River Ver.

Mr Thrale played rugby with the Old Albanians in his earlier years and later became president of the Old Albanian Club. He was also appointed to the Board of Governors at St Albans School and became chairman.

He worked as the chairman of trustees at Glenalmond elderly care home in King Harry Lane, where he was committed to improving facilities. He carried out further charity work through his membership of the Rotary Club.

Another interest was history and he wrote three books entitled Historic Sandridge, A New Thraliana and A Newer Thraliana.

With his wife, Mr Thrale bought a run-down farmhouse in rural France in 1963 which he worked to restore.

He is survived by Odile, two sons, a daughter and six grandchil­dren.