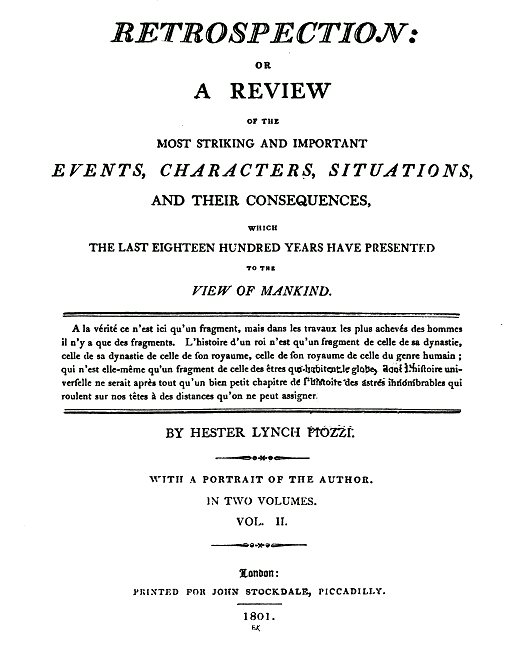 If the Rambler is right when he says

That no man ever obtains more from his most zealous endeavours, than a painful conviction of his own defects

how strongly must that conviction press upon her mind, who having collected all these facts together, presents them as an object of Retrospection to the Publick. Of those who turn them over, how different, how numerous will be the censures! while each expects his favourite hero, his best-remembered incident to be dilated and brought forward;—instead of which others perhaps appear, and take the lead.

Different observers attach to every object, different degrees of importance. Taking a country-walk one day in a remote province, the steward advised speedy removal of an ugly stag-horned tree. "Oh!" cried out a gentleman in company who was taking views—"pray spare the favourite feature in my landscape." "You have been, sir, a friend to the distressed," said another of our party, who professed natural philosophy—"in saving from the axe those old dry boughs, for there are birds which will not perch among thick foliage, making rather a stag-horned tree like this, their feat of delight all summer".

This conversation has often come to mind, but the die is now cast, and complaints are vain. If however, I should have made improper choice of facts, and if I shall be found at length most to resemble Maister Fabyan of old, who writing the Life of Henry the Fifth, lays heaviest stress on a new weather-cock set up on St. Paul's steeple during that eventful reign; my book must share the fate of his, and be like that forgotten: reminding before its death perhaps, a friend or two, of a poor man living in later times, that Doctor Johnson used to tell us of: who being advised to take subscriptions for a new Geographical Dictionary, hastened to Bolt-court and begged advice. There, having listened carefully for half an hour,—"Ah, but, dear sir!" exclaimed the admiring parasite, "if I am to make all this eloquent ado about Athens and Rome, where shall we find place do you think for Richmond or Aix la Chapelle?" The perplexity was laughable enough—yet such are the perplexities of a compiler; and for a mere compilation stretched to two quarto volumes, the apology must be a serious one. It will be found however; but among things and situations so far from laughable and ludicrous, that they appear even awfully impressive.

To an age of profound peace and literary quiet I should have considered such an abridgment as insulting: to our disturbed and busy days abridgments can only be useful. No one has leisure to read better books. Young people are called out to act before they know, before they could have learned how those have acted who have lived before them. History is voluminous, and fashionable extracts are so perpetually separated from each other by verses or by essays, that they leave little trace of information on the mind: a natural consequence, and manifest disadvantage attendant upon all selections, where no one thing having any reference to another thing, each loses much of its effect by standing completely insulated from all the rest. Our Work, though but a frontispiece and ruin, contains between the two some shaded drawings, such as we find in rudiments of painting, and will, like them, be good for young beginners. Perhaps too ,those who long ago have read, and long ago desisted from reading histories well-known, may like to please their fancies with the Restrospect of what they feel connected in their minds with youthful study, and that sweet remembrance of early-dawning knowledge on the soul.

Their criticism I not only deprecate, but hope, by dint of petty amusement, in some measure to disarm: a pleasant story will divert, a tender tale affect them. No insolently obtrusive opinions through these pages, no air of arrogance will offend, or provoke such readers to say, however they may think, that the necessity of dilating, as it advances, like an inverted cone or sugar-loaf, robs my whole building of that solid basis which many fabricks boast, on which, after all, little sometimes is reared. A moment's thought indeed will shew such criticks, that any other way would have been worse: and half a moment will suffice to prove, that whilst the deep current of grave history rolls her full tide majestick, to that ocean where Time and all its wrecks at length are lost; our flashy Retrospect, a mere jet d'eau, may serve to soothe the heats of an autumnal day with its light-dripping fall, and form a rainbow round. Did no such book catch the occurrences, and hold them up, however maimed and broken, before the eyes of our contemporaries, we really should very soon forget all that our ancestors had done or suffered. The fever of these last ten or twelve years has formed a heat sufficient to calcine the images upon our minds to dust and ashes, which once seemed strong as if engraved on marble; and if some facts of characters have been called back, 'twas for the use of consultation they were fetched, then thrown again into the general heap, like papers we have done with, doomed to burn. In such a furnace, such an all-devouring crucible, events can scarce retain their proper value, and the mushroom of a night has equal chance to come forth unhurt, as has the oak of a century. Besides that our motto speaks fairly for the chapter it precedes, and says,

This work, I grant you, is at best a fragment; but what else shall we find in the most finished labours of man? The biography of one particular sovereign is a mere fragment, broken off from his own dynasty. The revolutions of a peculiar state form but a larger fragment; one piece, one page, torn from the great book, the general account of all mankind; which is itself at last no other than one species, one genus rather, among those uncounted millions that animate and people the earth, air, and water, of our terraqueous globe. That globe a fragment too, a trifling spot, of which the most exact and faithful narration would be found but a short chapter in the grand history, the universal volume of our Creator's works, containing the changes and chances of systems without number, rolling in illimitable space, at distances not to be judged of by humanity.

But 'tis by darkening the glasses that we look at brightest objects; and spots in the sun could never be discerned unless we first abridged him of his splendour. Old Bradshaw, who wrote upon the origin of Chester, must in some sort serve as my model, who live near him, when he says in his prologue to a work rather historical than legendary, and more valuable (as Warton tells us) for virtuous sentiments than splendid diction; how

For though I borrow not the Doctor's chair, whence at my ease to dictate creeds and ethicks, "tis my intent, that from this book be drawn nothing that can prove detrimental to readers whose attention I am desirous to lure away from fiction to known truths, no less extraordinary, and at this moment far more interesting. To this end I have endeavored not to press on them with my own reflections, rather suggesting thoughts in their minds, than forcing forward those entertained by the authors; yet if the chain of events here untwisted should lend them reason to be less surprised at what is passing now, there"s no harm done; the warnings have been given.

Here then begin we a summary account of what has happened in these eighteen centuries. I thought to have given some importance to the work, by prefixing on its first page the name of one of my earliest and most respected friends—than whom no wit, no scholar, nor no man of general knowledge, ever had more reason to delight in Retrospection: but Pennant is gone, and I will search no further for a patron. The same kind and encouraging Publick which has ever looked up on my labours with a tenderness, and a good-natured desire of being pleased, more flattering far than hard-earned approbation, shall take as it is; and if they feel themselves pleased with the colours presented in the varying changeful mass, will try to hinder some critics heavy hand from breaking it; remembering that an opal loses all power of playing before the eye, soon as a crack is made in its thin surface.

But I will not run down my own book no more. The duty of an author is discharged, when what the title promises has been performed. Yet let it not be said of Retrospection, as once by a French wit, when Ferrand's Erotica, a dull dissertation upon the passion of love, came out,

The title inspir'd me a strong inclination,
But reading the book, I was cur'd of my passion.

Retrospection: or, a review of the most striking and important events, characters, situations and their consequences, which the last eighteen hundred years have presented to the view of mankind by Hester Lynch Piozzi nee Thrale. Published 1801 in two volumes by John Stockdale . Full text available at Google books, Volume 1, Volume 2.