William Thrall is the founder of the Thrall family in the United States.

William was born in 1605 in Sandridge, Hertfordshire, England and came to the colonies on the Mary and John in the year 1630. He died on 3 August 1679 in Windsor, Connecticut.

The Mary and John was a vessel of four hundred tons captained by a man named Squeb and the vessel sailed with 180 passengers. William was part of a company of Puritans under the leadership of Rev. John Wareham of Exeter and Rev. John Meverick, both ministers of the Church of England Setting sail from Plymouth, England on 20 March, they first came ashore on 30 May 1630. 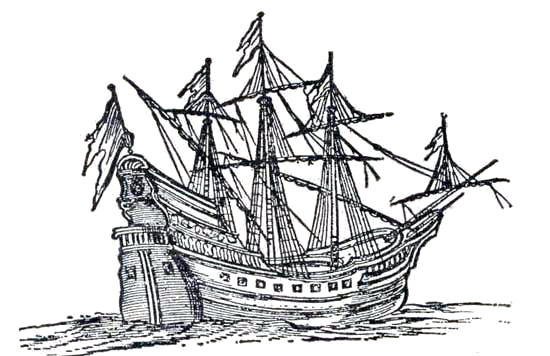 They disembarked with what goods they had, to some high land in the salt meadow, now a part of the city of Boston. They named the place Dorchester, which was selected by the captain of the "Mary and John" as he came from Dorchester, England. Page 277 of Prince's Chronology of New England records…

May 30, Lord's Day. Mr. Wareham and his church, and their goods, were put ashore at Nantasket Point. The went immediately to Charlestown, and from thence to Mattepan, and began a town and named it Dorchester, and the native Indians were kind to them.

Revs. Wareham and Meverick and their group stayed in Dorchester less than five years, as a number of their menfolk had discovered more fertile land below the first falls of the Connecticut River, at the junction of the Farmington River just above Hartford. Part of the colony went by boat and the remainder travelled across the one hundred miles of virgin forest, to establish the town of Windsor. Windsor was unofficially known as Thrallville in the early years.

The first we know of William Thrall is that he is listed with the following men who were among the thirty men who went from Windsor to join in the fight against the Pequod Indians in May 1637. Capt. John Mason, Sgt. Benedict Alvord, Thomas Barber, Thomas Buckland, George Chappel, John Dyer, James Eggleston, Nathaniel Gillet, Thomas Gridley, Thomas Styles, Sgt. Thomas Stares, Richard Osborn, Thomas Parsons, William Thrall. The Indian village in this case was so completely destroyed that for many years, the settlers had no further trouble with the Indians. Some years later, the participants were given land grants. To quote from Dr. Styles records with regard to the first Indian war in New England,

The danger was imminent, and so complete the victory that it caused universal rejoicing throughout New England, and a grant of land was given each soldier and officer, and to this day the memory of an ancestor who was in the Pequod fight, is an honorable heirloom in every Connecticut family.

William Thrall is mentioned many times in the early records. His lot shows up in the first plot of Windsor, between the lots of Nicholas Palmer and Thomas Bascomb, and ran from the road to the Farmington River. In 1646, William sold this lot to Nicholas Palmer and moved to Simon Hoyte's place, north of the village. Robert Wilson bought a half interest with William in the Hoyte's 80 acres, but sold his half to Thrall in 1654. This 80 acres has been part of the holdings of the Thrall family ever since.

William Thrall was born in 1605 in Sandridge, Hertfordshire, England, and died on 3 August 1679 in Windsor, Connecticut, America. William Thrall made his will in 1678.

We know very little about the wife of William Thrall. She is referred to in the old Windsor records as Goode Thrall, but 'Goode' was an expression applied to women with families and it is simply an abbreviation of 'Goodwife'. Whether she came over to New England on the "Mary and John" with her husband or they met in Dorchester, has never been established The record of her death simply states…

I have just found William Thrall and my ancestor through the Hosford family.

Let me say that your website is very well done and has been quite helpful. Thank you in advance for this information.

Join the discussion about the US Thralls»